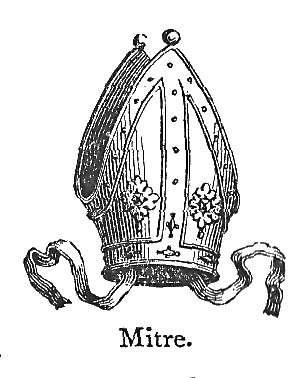 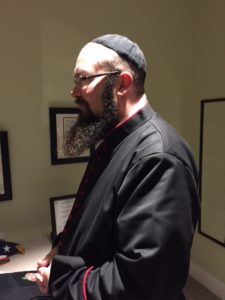 Fr. Isaac in his Zucchetto 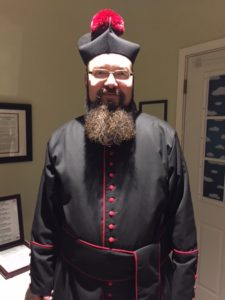 Fr. Isaac in his Biretta with a Canon’s Pom

As some of you know, I am a big fan of hats. I have a straw hat for the summer, several felt hats for the winter, and even a top hat for the most special of occasions. A couple of weeks ago, I received a new hat, just in time for Christmas. But unlike most of my hats, this was a biretta, a specific clerical hat for liturgical use. The thing about liturgical hats is that they are inherently odd-looking for most people, as we simply do not use them much in 21st century America. Several of you asked me about my new biretta, the red pom-pom on top, and whether this was a Christmas thing or something else. As such, I decided to kick off a new series on vestments and clerical wear with a post on ecclesiastical headgear.

We see some roots of ecclesiastical headgear all the way back in the Old Testament, when the priestly garments are commanded (Exodus 28). Depending on your translation, the high priest is to wear a special “turban” or “mitre,” and the rest of the priests are to wear “caps” or “bonnets.” You can see an artist’s rendering of the different OT liturgical garments here.  While there have been various attempts over the years at connecting the traditional Christian liturgical garments with that of the OT, most modern scholars see this as a retroactive connection rather than an intentional one. Nevertheless, it does set a biblical precedent.

At All Saints, the most common liturgical hat we use is the zucchetto or skullcap. In its Latin version, it typically has eight panels and a stem for grasping when donning or doffing. In the rarely-seen English version, it typically is a bit larger with six panels and a button. While it resembles the Jewish kippah or yarmulke, the two traditions developed independently of each other. Originally, the Christian skullcap was designed to keep the tonsured head of clergy warm in the often-drafty European churches without fully covering the head. As a man who has been given a natural tonsure thanks to genetics, I can attest that it is very useful on winter mornings! In current custom throughout the Western Church, the zucchetto of priests and deacons is black, and that of bishops is purple. In Anglican circles red or purple piping/trim is sometimes used for canons and archdeacons/deans, respectively. The use of a skullcap has fallen out of fashion in much of the Church, however, and is not seen as widely as it once was; in the wider Anglican world, it is most commonly used by high church bishops. The zucchetto is not worn during the consecration at Holy Communion. It has come to symbolize being under the authority of the Church and of God. 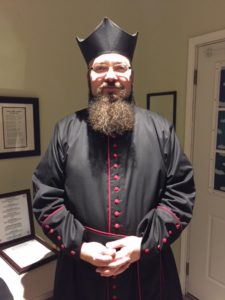 Fr. Isaac in his Bonete 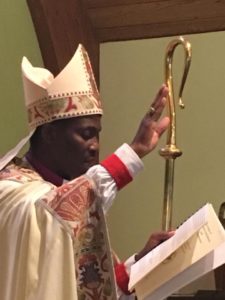 Bp. Orji in his Mitre

The biretta or cap is the traditional liturgical hat for Western priests and deacons, though it has also fallen out of fashion among most of the Church. It is worn for processions and when seated to listen to Scripture or a homily, but not when conducting the Liturgy. Additionally, it may be worn outdoors for non liturgical functions. Historically, it has its roots in the academic garb of the late middle-ages. The mortar board caps and academic tams one sees at graduation ceremonies are other descendants of the same medieval cap. The biretta comes in several varieties, the most common being the Latin style, which is stiff or collapsible, with three peaks and a pom. The Spanish style (sometimes called a bonete) is stiff and has four horns rather than three peaks. The English Canterbury Cap is a similar hat with a soft, flat, four-cornered design without a pom. Again, these hats are colored according to office: priest and deacons wear black, bishops wear purple, and (among Anglicans) canons and archdeacons/deans may have black with trim or poms in red and purple, respectively. The cap is a reminder of St. Paul’s admonition to St. Timothy for the need to study the Scriptures (2 Timothy 2:15).

Finally, the mitre is the most commonly seen liturgical headgear in the Western Church, and is reserved for bishops. Its two peaks are reminiscent of the “divided tongues as of fire” that came on the Apostles at Pentecost (Acts 2:3). The two tabs that hang down are to remind us of bookmarks used to keep our place in the Old and New Testaments when reading the Bible. Traditionally, the mitre is usually white or gold, though in recent years it often matches the cope or chasuble of the bishop, often based on the liturgical color. Generally, when the bishop prays, the mitre is removed and either held by his chaplain or placed on the altar.

For Anglicans, the use of all headgear is a matter of custom rather than canon. This is not the case, of course, for our Roman Catholic friends, who have detailed canons on ecclesiastical dress. At All Saints, we generally use our headgear on special occasions and celebratory seasons when our finest liturgical clothing is used.