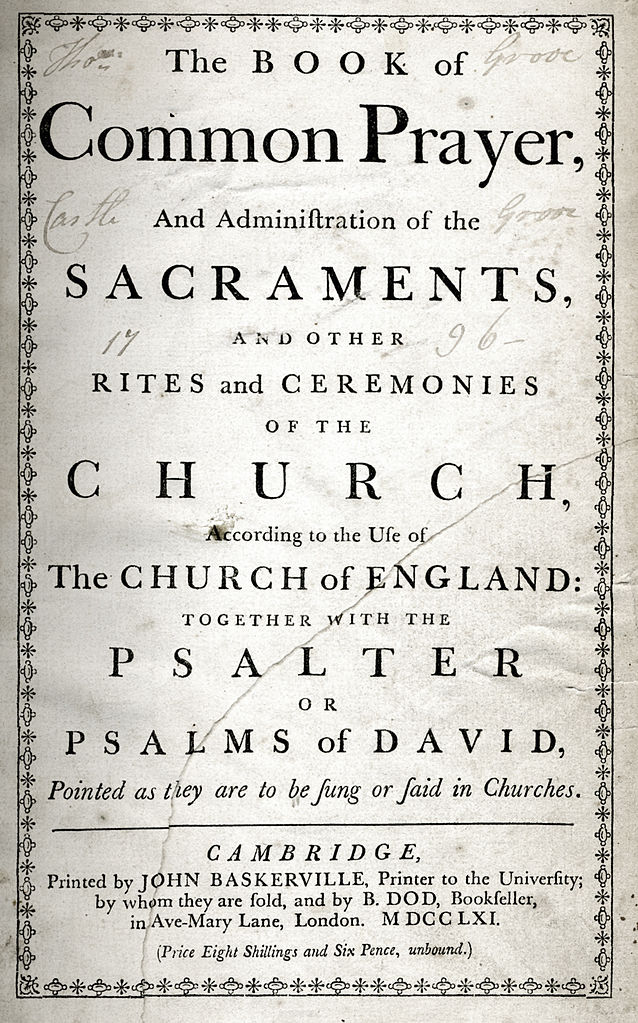 By the Rev. Canon Isaac J. Rehberg
Canon for Liturgy, CANA West
Eve of Lent 1, 2018
Submitted to the Clergy of the Diocese

For almost a decade, orthodox Anglicans in North America have been looking forward to a new Prayer Book that corrects the theological problems from the revisions in the late 20th Century. The ACNA Liturgy Task Force has been diligently working on this project with a goal of completing and publishing the finalized Prayer Book in 2019. The Texts for Common Prayer have been available online and in printed form for a few years in trial form, but are being revised as feedback is received. The most recent revisions were in January of this year. As many people and parishes have not yet explored the ACNA texts, and others were unaware of the recent revisions, I thought it timely to report on the proposed liturgies. Specifically, I will address Holy Communion and the Daily Offices, as these are the principle services of the Church in the Anglican tradition.

The Anglican Standard Text is essentially a modern-English rendering of the Holy Communion liturgy from the Cranmerian Books of Common Prayer (e.g. American 1928, Canadian 1962, English 1662) with some light revisions.  Most of these revisions reflect 20th Century scholarship and liturgical sensibilities, such as the option to include additional readings, the option to use the Trisagion instead of the Kyrie, the use of “we” in the Creed, and the restoration of the Gloria in Excelsis to its pre-Reformation location. None of these revisions are of special theological controversy, but are generally welcome. Options are included in the rubrics to rearrange some of these elements to their classical order as well. That is, if desired, one could use the Anglican Standard Text to simply be a modern-English version of the 1928 or 1662 liturgies.

The most notable change to prior versions of this text is the elimination of the “Common Text” or “Short Form” as a separate rite. Rather, the rubrics now include options for shortening the Standard Text when necessary or expedient. This is a very welcome change; the separation of the Standard Text from the Common Text was not particularly necessary and led to widespread use of the Common Text in a manner that was not intended by its authors.

In short, the Anglican Standard Text is a gentle evolution of our classical liturgies rather than a revolution, which was all-to-common in the 20th Century. As canon for liturgy, I highly commend this text as a faithful expression of our Anglican liturgical and theological heritage.

The Renewed Ancient Text (formerly known as the “Ancient Text”) is rooted in the Liturgical Movement of the 20th Century. This will be most familiar to those who are used to the American 1979 liturgies (especially Eucharistic Prayer A), and to a lesser extent the 1996 Nigerian Prayer Book, the various alternate service books in the Anglican Communion, and the Roman Catholic Novus Ordo. That said, the theological ambiguity (at best) of some of the 1979 prayers has been corrected. The Renewed Ancient Text is thoroughly orthodox and theologically compliant with the Anglican Formularies.

As far as I can tell, other than greater precision in the name of the text, the main changes from prior versions are small tweaks in the wording of some of the prayers for the sake of theological clarity. This text is ideal for congregations that have historically known and used the 1979 liturgies, as it will feel familiar. Additionally, this would be a text well-suited for ecumenical gatherings, as most modern liturgies in other denominations share similar roots in the Liturgical Movement.

That said, I would encourage Anglicans to become familiar with the Cranmerian forms (including its modernization in the Anglican Standard Text), as this is more consistent with our post-Reformation tradition. Despite its name, the Renewed Ancient Text is not based on any single historic liturgy practiced by the English Church and her daughters, but is rather based on modern amalgamations of recently-discovered fragments of historic liturgies. That is, it is more of a scholarly attempt to recreate probable ancient liturgical forms than a representation of a specific ancient liturgy that was in use at a specific time.

A Note on Elevation

The bishop asked me to address the manual actions traditionally used during the Words of Institution in Holy Communion, specifically the traditional manner of elevating the bread and wine following each of the “do this in memory of me” passages. According to the consensus of liturgical manuals throughout the Western Church, the customary method is to kneel, rise while elevating the patten/host or chalice, then kneel again. Often this is accompanied with a ring of the Sanctus Bells at each of the three actions. Of course, this was generally discontinued from the Reformation until the 19th Century, out of concern that it implied Eucharistic adoration or popular Roman Catholic misunderstandings of “re-sacrificing” Christ in the mass. Among more Reformed-minded Anglicans, the practice may be maintained without medieval theological baggage, but can rather be seen as a liturgical expression of John 3:14, “And as Moses lifted up the serpent in the wilderness, so must the Son of Man be lifted up, that whoever believes in him may have eternal life.” That said, the elevation is not required by the rubrics, and is therefore custom rather than canon.

Morning Prayer and Evening Prayer (often called “Matins” and “Evensong,” respectively) each follow the same basic format. Both in the similarity of format and in the format itself, this is the same as in the classical Books of Common Prayer. Other than the use of modern English, the main differences between Texts for Common Prayer and the classical Prayer Books are found in the collects and canticles.

With respect to the collects, the classical Prayer Book generally presented three: the “Collect for the Day” (I.e. the one used on the previous Sunday and/or current Holy Day), and two collects that are used every day (the collects for Peace and Grace in Matins and the collects for Peace and Aid in Evensong). By contrast, the Texts for Common Prayer use two collects each day: the Collect for the Day (as above), and one of seven collects assigned for each day of the week. These seven collects consist of the standard collects from the classical Prayer Books with several additional collects. This is consistent with the pattern established in the 1979 prayer book.

With respect to the canticles, the classical Prayer Books assigned the Venite before the psalms in Morning Prayer, and had a choice of one of two or three canticles following each reading. The Texts for Common Prayer have added the Phos Hilaron before the psalms in Evening Prayer, moved the Jubilate from a post-reading option to an alternate to the Venite in Morning Prayer, and removed the distinction between readings. That is, while the classical Prayer Books provided a choice of specific canticles to follow the Old Testament reading and other canticles to follow the New Testament reading, Texts for Common Prayer simply gives all the canticles as options to follow each reading. Additionally, the general pattern of a reading from each Testament has been replaced with a rubric to have one or more readings. Furthermore, the Venite has been altered somewhat. In most of the classical Books of Common Prayer, the Venite was the entirety of Psalm 95. In the American version, however, it was 95:1-7 combined with 96:9,13. Texts for Common Prayer uses 95:1-7 as the standard Venite with verses 8-11 added during penitential seasons. Finally, numerous additional canticles have been added in a supplemental addendum. Some of these are the pre-Reformation canticles from the Old Testament and Apocrypha. Others are additional New Testament canticles introduced with the 1979 Prayer Book.

While this makes for very flexible offices, I find the layout more confusing than the classical Books of Common Prayer. However, this confusion would be eliminated as one uses the texts regularly. Nevertheless, I think it may creat a steeper learning curve than is ideal.

The most sweeping change in the January updates was the Daily Office Lectionary. Previously, the proposed lectionary was based on the Liturgical Calendar, as has been typical since the early 20th Century. The January revision has returned to a lectionary based on the Civil Calendar, as was typical in previous centuries. While this is a paradigm shift for most modern Anglicans, I greatly welcome the change, as it allows for a more systematic reading of the Scriptures. That said, others have expressed confusion and concern over the new lectionary, even accusing it of being overly “Puritan.”

In evaluating the merits of the new lectionary, the purpose of the Daily Offices must be considered: is the Daily Office more about supplementing our Sunday worship, or is it about soaking ourselves in the Scriptures? When one reads Cranmer’s original preface to the Book of Common Prayer, one sees that he thought it to be the latter. That is, for Cranmer, the Offices provide a means for the faithful to read or hear the majority of the Bible each year in the context of daily prayer. Cranmer argued that this was the pattern of the ancient church but had been obscured in the Middle Ages by a liturgical calendar bloated with special days and seasons that disrupted the regular reading of Scripture. Cranmer’s solution was to have systematic reading during the Offices and seasonal readings for Communion on Sundays and Holy Days. The new lectionary is a return to Cranmer’s vision.

As noted above, I generally welcome this change, as it provides for more Scripture than any lectionary in our history. That said, there are still some parts of the Bible that are not included in the lectionary, most notably large chunks of Leviticus and Numbers, generally relating to Israel’s civil and ceremonial laws. Additionally, the books of Kings and Chronicles have been combined to form a single narrative. Both of these omissions are understandable, but I would rather have omitted the several weeks of reading from the Apocrypha and included more of the Canonical Old Testament. As edifying as the Apocrypha is, it is not at the same level as the Canonical Scriptures. Additionally, there are no readings for the major Holy Days, such as Christmas, Easter, and Pentecost. However, the rubrics suggest using readings from an addendum on those days if one’s congregation does not offer Holy Communion on those days. This is a reasonable compromise for the sake of including more Scripture.

The most common complaint I have heard about the Texts for Common Prayer is that they are constantly changing. While this is certainly frustrating and challenging when one is trying to foster stability in a congregation, such change is inevitable during the trial phase of a new liturgy. We are still in such a phase. As noted above, the Province has stated a goal of completing the ACNA Prayer Book in 2019. As such, the Liturgy Task Force is currently encouraging as much feedback on the proposed texts as possible. With that in mind, I encourage all of us to look through these texts, submit feedback, and be patient with the process. Indeed, I cannot help but think that my own letter to the Task Force over a year ago contributed to the changes in the Daily Office Lectionary. So, do not hesitate to try the texts (whether publicly or privately) and let your voice be heard by the Task Force. While I doubt we will ever see complete liturgical uniformity among orthodox Anglicans in North America, the Texts for Common Prayer are a good step in the right direction, and will help curb the liturgical hyper-diversity that has been the norm in recent years.

You can download the Texts for Common Prayer at the following links: