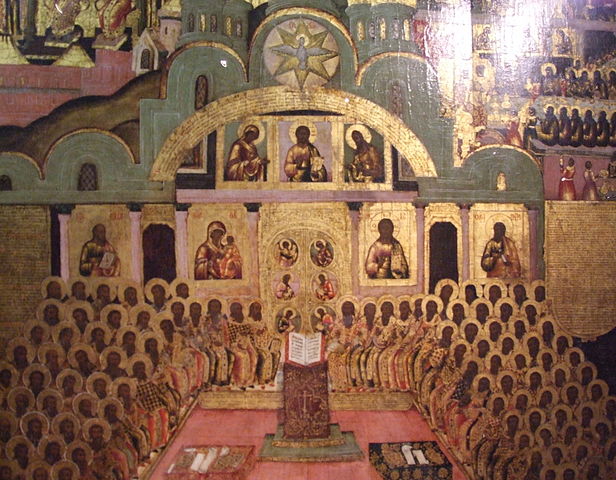 Editor’s note: in last night’s introductory class on the Seven Ecumenical Councils, St. Vincent’s Canon was mentioned. Here is the promised re-post of some reflections on St. Vincent from early 2017.

Moreover, in the Catholic Church itself, all possible care must be taken, that we hold that faith which has been believed everywhere, always, by all. For that is truly and in the strictest sense Catholic, which, as the name itself and the reason of the thing declare, comprehends all universally. This rule we shall observe if we follow universality, antiquity, consent. We shall follow universality if we confess that one faith to be true, which the whole Church throughout the world confesses; antiquity, if we in no wise depart from those interpretations which it is manifest were notoriously held by our holy ancestors and fathers; consent, in like manner, if in antiquity itself we adhere to the consentient definitions and determinations of all, or at the least of almost all priests and doctors.

In my personal studies, I am about two thirds of the way through the Commonitorium by St. Vincent of Lerins. Some of you may be familiar with a portion of the quote above, which is commonly known as the Canon of St. Vincent. We often use St. Vincent’s criteria of “everywhere, always, by all” as a litmus test for what practices can truly be considered “catholic.” In particular, we will often appeal to St. Vincent’s canon when opposing the theological, pastoral, and frankly un-Scriptural innovations that are plaguing much of the Church, including much of the Anglican Communion.  With that in mind, here are a few thoughts on what I have read so far:

The Primacy and Supremacy of Scripture

St. Vincent begins the book by quoting from Scripture. It is the Scripture that always provides the baseline for catholicity. In terms of actually applying the Canon of St. Vincent, the goal is not one of discovering truth in a vacuum, but is actually about discovering the true and proper way of applying and interpreting Scripture.  St. Vincent notes early on that people are all-too-capable of misusing Scripture to justify false teaching. In fact, all of the major heresies throughout history appeal to Scripture for their teachings; they just do so in ways that contradict other parts of Scripture and are contrary to the Church’s historic teachings. That is, we appeal to the witness of the Fathers as the interpretive lens through which we see Scripture, never as a way of supplanting or contradicting Scripture.

The Problem of Heresy

The first half of St. Vincent’s book is dedicated to describing the earliest and most widespread heresies (e.g. Arianism and Donatism), and contrasting them with the truth. Most of these heresies had to do with the nature of God and of the Persons of the Trinity, especially heresies regarding the Person of Christ. The problem with these kinds of heresies is the fact that bad Christology leads to bad beliefs about our salvation. When we are in error about who God is and who Christ is, we will usually be in error about how we are reconciled to him. This is very dangerous for our souls. While St. Vincent does not get into details about this, combating these early heresies is what led to the Ecumenical Councils. In this way, we see the importance of proper theology. As my friend, Fr. Chris Richardson, is fond of saying, “theology must precede doxology.” That is, if we’re going to properly worship God, we have to know the right things about him!

The final and most sobering aspect of my study of the Commonitorium thus far was the case study on Tertullian and Origen, the greatest teachers of their day in the Latin and Greek communities, respectively. Both of these priests were top-notch scholars. Both of them had many devoted disciples that were growing in the faith. Both of them have writings from the beginning of their careers that are still highly valued today. However, both of them eventually fell into error and had to be repudiated. While St. Vincent does not go into the details of their falls from orthodoxy, he suggests that the key to their falls was pride. In their popularity and greatness, St. Vincent suggests that they began to think of themselves higher than they should have and did not even see the errors that began to creep in. In short, they believed their own press sheets and fell into false teaching.

It is not uncommon today to see popular pastors and teachers fall into error or scandal. This problem is nothing new. But it is nevertheless a sobering reminder to stay grounded in the Scriptures, and in the Apostolic Faith we have received. For those of us who are pastors, priests, and teachers, we must remain humble and not allow pride to seduce us from the Truth. For those of us who are disciples, learners, and students (which includes both laity and clergy), we must not allow admiration of our leaders to turn into blindness. We all have a responsibility to be in the Word of God and to protect each other from false teaching and sin. It is no accident that “everywhere,” “always,” and “all” are collective words. The Christian faith requires us to be part of community of the Church to flourish. As St. Paul reminds us, we are all members of the Body of Christ. Let us work together to keep that body healthy.