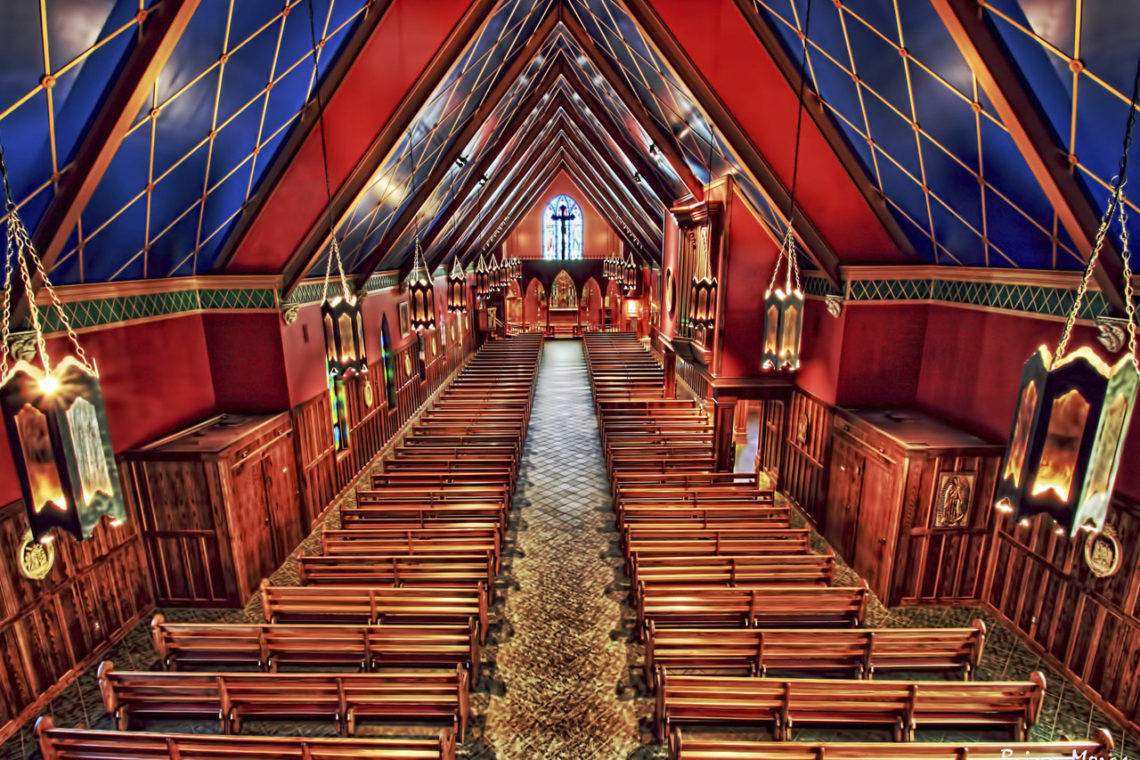 One of the more popular 17th Century English writings on the priesthood is The Country Parson by poet and priest George Herbert. This was his only prose work, in which he offers practical advice to rural clergy. It’s a well-beloved book that is often read by seminarians to this day. Most folks, however, don’t realize that The Country Parson isn’t its actual title; its actual name is A Priest to the Temple. I find it very interesting that even in the formative days of the Reformation, English-speaking Christians often referred to the parish church as the temple. Another example would be the official title of the first homily from the Second Book of Homilies, official sermons from the Church of England in the First Queen Elizabeth’s time. The full title of the first homily is “An Homily of the Right Use of the Church or Temple of God.”

In Jesus’ day, if a Jewish person, like our Lord or one of his Apostles, referred to “the Temple,” there was only one place they could mean: The Temple in Jerusalem. There were many, many synagogues where people would read the Scriptures and pray on the Sabbath or for daily prayers. 19th Century priest and historian Alfred Edersheim tells us that Jerusalem alone was rumored to have scores of synagogues, let alone the synagogues found in the rest of the known world. But there was only one Temple. And the Temple wasn’t primarily for hearing sermons, studying the Scriptures, praying, or singing hymns. No, the primary purpose of the Temple was for the Levitical Priests to offer animal sacrifices.

The Temple in the Gospel narratives was a significant renovation by King Herod of the 2nd Temple, originally built in the days of Ezra and Nehemiah when the Jews returned from the Babylonian exile. The 1st Temple, you may recall, was built by King Solomon, and was so glorious that the people that had seen both Temples wept because the 2nd one simply couldn’t compare. The roots of the Temple go further back, though, all the way back to the 2nd half of Exodus, when God spent about 15 chapters commanding Moses and the Israelites to construct a Tabernacle. Many English bibles call the Tabernacle the “Tent of Meeting,” because it was in the Tabernacle that God would meet with Moses and receive sacrifices from Aaron and the priests. The Hebrew word for Tabernacle, “Mishkan,” literally means “dwelling place.” Via the Tabernacle, and later the Temple, God dwelt with his people.

Today’s Gospel reading begins with Jesus weeping over Jerusalem, and by extension, the Temple. Please turn in your bibles to Luke 19:41, found on page 204 in your Prayer Books:

And when he drew near and saw the city, he wept over it, saying, “Would that you, even you, had known on this day the things that make for peace! But now they are hidden from your eyes. For the days will come upon you, when your enemies will set up a barricade around you and surround you and hem you in on every side and tear you down to the ground, you and your children with you. And they will not leave one stone upon another in you, because you did not know the time of your visitation.”

Jesus is prophesying about the destruction of the Temple and Jerusalem 40 years later, in 70AD. This was an absolutely devastating event for the Jewish people. Several sects of Judaism, such as the Sadducees, couldn’t even survive without the Temple. Historians note that many Jews became pagans in despair. Others joined the growing Christian movement, which was further and further separated from Judaism after this point. The Jewish Talmud, or Oral Law, says that the destruction of the Temple was God’s judgement for polarization and hatred between competing Jewish groups.

Jesus, however, said that it was because Jerusalem “did not know the time of [its] visitation” (verse 44). What visitation? The coming of the Messiah, the Son of God, Immanuel, “God-with-us.” Remember that the Temple was a sign of God’s presence with his people. When Solomon first dedicated it, God’s presence was so profound that it manifested as a thick cloud of glory, and they had to stop the dedication service. But at the time of the exile, the Prophet Ezekiel saw God’s glory leave the Temple, never to return, not even when the exiles rebuilt it. But when Jesus came, St. John writes: “The Word became flesh and dwelt among us, and we have seen his glory, glory as of the only Son from the Father, full of grace and truth” (John 1:14). God’s presence, God’s glory, had returned to his people and to the Temple, but the people missed it.

After weeping and prophesying over the Temple, Jesus then enters and cleanses it. Verse 45:

And he entered the temple and began to drive out those who sold, saying to them, “It is written, ‘My house shall be a house of prayer,’ but you have made it a den of robbers.’ And he was teaching daily in the temple.

By Jesus’ day the Temple had become notoriously corrupt. The high priesthood had ceased to be a holy office whose primary function was to make atonement for the people, but had become a political prize. Instead of being a lifetime office inherited in a direct line from Aaron, the high priesthood rotated between a handful of people every few years or so, based on favor with Rome and the Herods. In light of the corruption, some Jewish sects, like the Essenes, had completely given up on the Temple.

And, of course, the Temple was a big business, overcharging for sacrificial animals, and changing money at steep profits. These money changers had set up office in the area just outside of the Temple proper, also known as the “Court of the Gentiles.” This was the only area that non-Jews could enter, but the Temple officials had turned it into a bazaar rather than a place for the Gentiles to pray.

As he drives the sellers and money changers, Jesus quotes from Isaiah 56. Here is the full passage from Verses 3-8:

Let not the foreigner who has joined himself to the Lord say, “The Lord will surely separate me from his people”; and let not the eunuch say, “Behold, I am a dry tree.” For thus says the Lord: “To the eunuchs who keep my sabbaths, who choose the things that please me and hold fast my covenant, I will give in my house and within my walls a monument and a name better than sons and daughters; I will give them an everlasting name that will not be cut off.

And the foreigners who join themselves to the Lord, to minister to him, to love the name of the Lord, and to be his servants, everyone who keeps the Sabbath and does not profane it, and holds fast my covenant—these I will bring to my holy mountain, and make them joyful in my house of prayer; their burnt offerings and their sacrifices will be accepted on my altar; for my house shall be called a house of prayer for all peoples.” The Lord God, who gathers the outcasts of Israel, declares, “I will gather yet others to him besides those already gathered.”

By his sacrificial death, Jesus fulfilled the Ceremonial Law with all its rites, regulations, and sacrifices. The separation between Israel and the Nations is broken down, giving all people the same access to God through the blood of Christ. In Jesus, God gathers his people from all nations, and joins them to himself through Christ’s blood.

When he was prophesying about his own resurrection, Jesus said “Destroy this temple, and in three days I will raise it up” (John 2:19). The people thought he was talking about a building, but we’re told that he was actually talking about his body. Revelation 21:22 tells us that there will be no Temple in the New Jerusalem because Christ himself would be the Temple. As glorious as the Temple was, we have something much more glorious, the Lord himself, present with us in Word and Sacrament whenever God’s people gather. Everything about the Temple was to point us to Jesus, and everything it did is fulfilled in Christ.

But St. Paul tells us in several passages that we are also the Temple of God. For example, Ephesians 2:21,22 “In [Christ] the whole structure [of the Church], being joined together grows into a holy temple in the Lord. In him you are being built together into a dwelling place for God by the Spirit.” The Body of Christ, the Church, is God’s dwelling place. You can always find God with his people.

We’ve got a gorgeous church building at All Saints. I love the way our singing voices blend because of the high cathedral ceiling. I love the smell of incense that’s baked into its walls. I love our stained glass, icons, vestments, candles, and the Holy Table where we partake of Christ’s body and blood. But the building isn’t the essence of God’s Temple. God is just as present in the storefront church of a more contemporary parish. He’s just as present in the apartment meeting of underground congregations in China or the Middle East. Wherever God’s people gather to faithfully proclaim his Word and administer his Sacraments, we have the visible Church, the Temple of God.

He has promised that he is with us. May we always recognize the time of our visitation, for “the Lord is in his holy temple, let all the earth keep silence before him.” In the name of the Father and of the Son, and of the Holy Ghost. Amen.

Note: a recording of the homily can be found at our podcast.