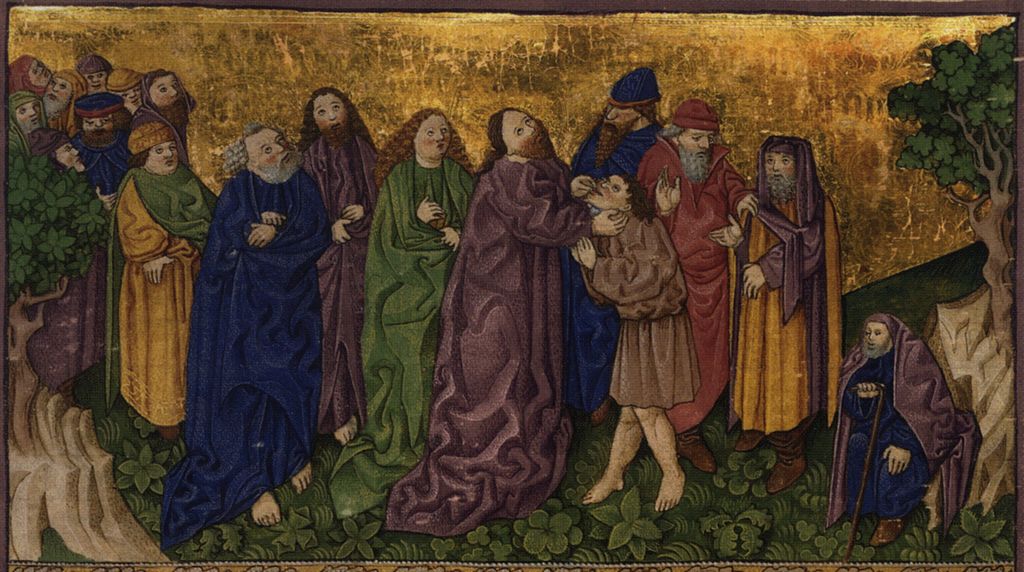 As humans, we rely heavily on our sight. While all of our five senses are important, sight is the one we use the most. Everything about typical human society is geared toward visual stimulus. It’s no wonder that most people would rather lose their hearing than their sight. Medical professionals, however, tell us that the blind find it easier to function in greater society than the deaf. Often with deafness comes some level of speech impediment, which often leads to social stigma. If someone has difficulty speaking, people sadly often assume they are unintelligent, for example. As a musician, I’ve often thought I would rather be in the position of Ray Charles, Stevie Wonder, or Jose Felciano (all of whom suffered from blindness) than Ludwig van Beethoven. While he continued to compose after going deaf, Beethoven could never again hear his music or his orchestra, and had to communicate with other people primarily through notebooks.

In today’s Gospel, Jesus heals a man who was deaf and had a speech impediment. This man’s story is a reminder to us of our own innate spiritual deafness, and the necessity of Christ’s miraculous healing if we’re to hear the living words of God. Please open your bibles to Mark 7:31 (page 206 in the Prayer Book):

Then [Jesus] returned from the region of Tyre and went through Sidon to the Sea of Galilee, in the region of the Decapolis. And they brought to him a man who was deaf and had a speech impediment, and they begged him to lay his hand on him.

St. Mark tells us that this miracle took place in the Decapolis, after Jesus had been ministering in the region of Tyre and Sidon (see the previous passage, verses 24-30). The regions of Tyre and Sidon and the Decapolis were gentile pagan outposts in the midst of the Holy Land. Sometimes we have a picture of 1st Century Israel as a monolithic Jewish area with Old Testament piety. In reality, it was quite multi-cultural, including areas that were as pagan as any Greek or Roman city. Some scholars have said that he spent as much as 8 months ministering in these gentile regions! Since the healing in today’s Gospel happens in the Decapolis, it’s reasonable to conclude that the deaf man and his friends were gentile pagans, not Jews who were expecting the Messiah. Why would these men seek out Jesus? They didn’t have the Scriptures or the Prophets to anticipate Jesus’ ministry. The Kingdom of God that he preached would have been a relatively foreign concept to them. There is no native cultural or religious frame of reference for Jesus’ ministry. Nevertheless, they came to Jesus on behalf of their friend, begging him to lay his hands on him. Jesus’ reputation had preceded him: they knew he was a healer. Perhaps they had tried various pagan magics or superstitions to cure their friend’s deafness. Perhaps, like many pagans, the had not so much rejected the God of Scripture, as much as wanted to add him to their collection of beliefs. Such a pick-and-choose spirituality is common in multi-cultural settings, as we see with today’s “spiritual-but-not-religious” folk, who don’t mind borrowing a little from Christianity, a little from the New Age Movement, a little from Buddhism, etc. Nonetheless, Jesus takes the little faith they had and uses it for God’s glory.

In our Collect, we addressed God as “always more ready to hear than we to pray” and “wont to give more than either we desire or deserve.” We certainly see this played out in the Gospel. I find this to be an immense comfort. I don’t know about you, but I certainly feel that my prayer life is much weaker than it should be. My desires are often more selfish than I’d care to admit. I know I don’t deserve, in of myself, any special consideration or blessing from God. But Jesus stoops down, coming to the level of us confused and silly children, and gives us God’s mercy, just as he did to the deaf man in our Gospel. Verse 33:

And taking him aside from the crowd privately, he put his fingers into his ears, and after spitting touched his tongue. And looking up to heaven, he sighed and said to him, “Ephaphtha,” that is, “Be opened.” And his ears were opened, his tongue was released, and he spoke plainly.

I find it very interesting that Jesus went through all those physical motions to heal the man. He certainly didn’t have to. Jesus’ healings weren’t incantations by a magician that require the exact words, actions, and materials for a proper spell. Jesus could have healed him with a mere word, or a mere thought. Perhaps he was using the touching of the ears and tongue to communicate to the man what he was about to do. Perhaps, as Isaac Williams, one of the Oxford Fathers, suggests, he “condescended to be almost like a human physician, who had need to use means to bring about his ends, [accommodating] Himself to the weakness of their faith.” Perhaps he was communicating to them a lesson on who he was in his humanity and divinity. St. Ephraim the Syrian says, “At that moment with fingers that may be touched, he touched the Godhead that may not be touched.” I particularly appreciate that he gives a spoken command, “Ephaphtha, be opened,” to a man who could not hear it at the time it was commanded!

This is similar to what happens with us when Christ saves us. He speaks to the spiritually deaf. He illuminates the spiritually blind. Until the Lord opens our lips, our mouths cannot declare his praise. St. Ambrose tells us that a common liturgical custom in the late 4th century was to announce “Ephaphtha prior to the homily or exhortation as a prayer that God would make us apt to hear his word.  Without the miraculous gift of the Spirit working in the ordinary means of grace, we cannot hear Christ. St. Gregory the Great writes, “The Spirit is called the finger of God. When the Lord put his fingers into the ears of the deaf mute, he was opening the soul of the man to faith through the gifts of the Holy Spirit.” Whenever the Word of God is faithfully preached and proclaimed, whenever the sacraments are duly administered as per Christ’s ordinance, we know it is the gift and work of the Holy Spirit. It is Christ, though his Spirit touching our ears, tongues, and hearts.

And Jesus charged them to tell no one. But the more he charged them, the more zealously they proclaimed it. And they were astonished beyond measure, saying, “He has done all things well. He even makes the deaf to hear and the mute to speak.”

Earlier, Jesus had taken the man aside to heal him. Now he charges them to keep the healing quiet. This is aspect of Mark’s Gospel, often called the “Messianic secret,” over which scholars and preachers are often puzzled. There are as many theories about why Jesus does this as there are commentaries on this gospel! One thing is certain: Jesus didn’t want to make a spectacle out of this man. Something important to remember when we look at signs and wonders is that they’re never supposed to be the focus. We should never be so distracted by the signs that we fail to see that which is signified. Don’t get so focused on bread and wine that we fail to see the communion with Christ in his Body and Blood, for example. Christ’s miracles (whether those recorded in Scripture, or those we sometimes still see), always point to Christ himself. It’s not about the healing, it’s about the healer.

In our collect we prayed, “Pour down upon us the abundance of thy mercy; forgiving us those things whereof our conscience is afraid, and giving us those good things which we are not worthy to ask, but through the merits and mediation of Jesus Christ, thy Son, our Lord.” Notice who is doing the action: God. He pours mercy. He forgives our sins. Jesus makes us worthy through his merits and mediation. We are mere recipients, deaf and mute apart from Christ’s healing touch, apart from his endless grace. And to our astonishment, he does indeed heal us with that same “Ephaphtha.” “He maketh both the deaf to hear and the dumb to speak.” So we pray:

O Lord, open thou our lips.
And our mouth shall show forth thy praise.
Glory be to the Father, and to the Son, and to the Holy Ghost,
As it was in the beginning, is now, and ever shall be, world without end. Amen.