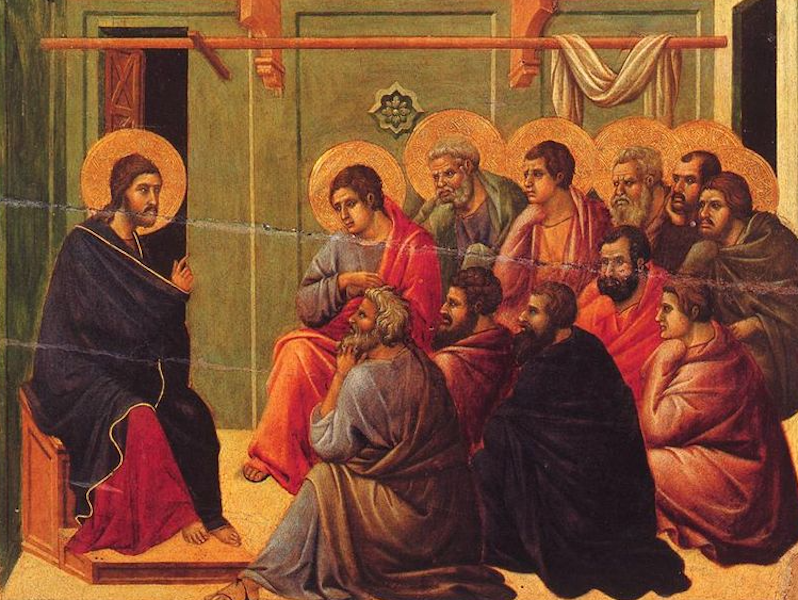 For those of us who have been using the parish Lectionary from the North American Anglican that takes us through the entire bible each year, we are currently in the middle of 1 Kings for our Morning Prayer Old Testament Lesson. Once Solomon dies and the Kingdom splits into Israel in the North and Judah in the South, we read about several kings each chapter. This week we’ve had about a dozen kings in all, split pretty evenly between the two kingdoms. In the Northern Kingdom of Israel, there have been several dynasties also. Without going into the gory details, a change in dynasty usually means a lot of blood as the ruling family is overthrown and wiped out for their grievous sins, only to be replaced by another wicked family who will be overthrown in a couple generations.

Of course, the Kings of Judah in the South weren’t much better. While they generally remained in the Davidic line, most of them were also wicked and fell under God’s judgement. In fact, this is a major aspect of the Book of Kings: God’s promises to David about an everlasting dynasty with a truly righteous king are not fulfilled in 1 or 2 Kings. Last week we discussed David’s prophecy in Psalm 110 that showed his heir to also be his Lord, that the promised Messiah would be more than a mere earthly king.

The Messiah’s authority, royalty, and kingdom are the major themes of the Gospel according to St. Matthew. After all, Matthew was writing to a Jewish audience who was expecting a Messianic King, and Matthew’s main purpose was to show his audience that our Lord Jesus was indeed the promised Royal Messiah. At the point of today’s Gospel reading, Jesus had just spent three chapters preaching the Sermon on the Mount and has begun a campaign of healing throughout Galilee. He had demonstrated himself to be the Messiah in word through his teaching; now he was showing himself to be the Messiah in deed through miracles and healings. He was showing them that the Kingdom of Heaven had truly arrived.

Please turn in your bibles to Matthew 9:1, which can be found on Page 216 in your Prayer Books:

And getting into a boat he crossed over and came to his own city. And behold, some people brought to him a paralytic, lying on a bed. And when Jesus saw their faith, he said to the paralytic, “Take heart, my son; your sins are forgiven.”

Jesus has returned to his home base but is still in the middle of this ministry campaign. According to the parallel passages from Mark 2 and Luke 5, this takes place in Capernaum, probably at the house of St. Peter. According to those parallels, this is the incident where the friends lower the man to Jesus after cutting a hole in the roof! These friends were willing to do whatever it took to bring the paralytic to Jesus, and verse 2 says that “Jesus saw their faith.” Perhaps Jesus had supernatural insight. Perhaps he just saw their determination on behalf of their friend.

What does Jesus do after seeing the faith of the friends? He heals the man. But he heals him in a way we wouldn’t usually expect. He doesn’t begin by declaring authority over the man’s paralyzed limbs. No, our Lord begins with the bigger problem, the root issue. Jesus says “Take heart, my son; your sins are forgiven.” As terrible as paralysis is, sin is a much bigger problem, a universal problem. This does not necessarily mean that there was direct correlation between the man’s paralysis and his sin. In fact, Jesus generally doesn’t look favorably on the assumption that various sicknesses are direct punishment for specific sins in a person’s life. Nevertheless, if it were not for the fall, if it were not for human sin, there would be no sickness or death. If this world were not under the curse of human sin, there would be no paralysis. Much more than physical healing, the man needed spiritual medicine. He needed the forgiveness of his sins.

Notice that Jesus calls him “my son.” According to the Scriptures, Jesus was between 30 and 33 years old during his ministry. I don’t know about you, but I would find a 30-year-old calling me “son” to be a bit odd, a bit incongruous. Unless, that is, he was someone in clear authority. Even when a king is relatively young, his subjects ought to see him in a somewhat fatherly role. After all, the king is to lead, protect, and represent his people, just as a father should for his family. St. Jerome writes that the paralytic was “a son, indeed, because his sins are forgiven him.” That is, the only way to enter the Kingdom of God, to be a Son of the Kingdom is to have your sins forgiven.

The Scribes, the Teachers of the Law, didn’t recognize this sign of God’s Kingdom. Verse 3:

And behold, some of the scribes said to themselves, “his man is blaspheming.” But Jesus, knowing their thoughts said, “Why do you think evil in your hearts? For which is easier, to say, ‘Your sins are forgiven,’ or to say ‘Rise and walk’? But that you may know that the Son of Man has authority on earth to forgive sins” – he then said to the paralytic – “Rise, pick up your bed and go home.” And he rose and went home.

Jesus’ declaration of forgiveness of sins was the cause for the scribes accusing him of blasphemy. After all, can anyone but God truly forgive sins? Does anyone else have the authority to pardon a sinner? One wonders if the Scribes would have been happy to see sins forgiven in the first place. I recently heard a Christian author describe sin as always having its root in human beings thinking they can be God. We want to be in charge. We think we know best. We want to be our own highest authority. We all, deep down, have a God complex. The Scribes, as experts in the Scriptures, tended to think that way about God’s Word. Someone showing up with the divine authority to forgive sins would undermine their authority as the experts on God and religion.

And Jesus knows this. They hadn’t made their accusation, their self-righteous indignation out loud. Our text says that they said it “to themselves.” But Jesus knows their hearts and calls them out on it, another demonstration of his authority as God’s Son. St. John Chrysostom observes, “Only God could know what is in another’s mind.” We say the same thing each Sunday in the Collect for Purity at the beginning of our liturgy: “Almighty God, unto whom all hearts are open, all desires known, and from whom know secrets are hid…”

The Scribes’ understanding that only God can forgive sins was correct. Even before the healing, Jesus showed that he had that authority when he exercised another aspect of Divine authority: knowing the Scribes’ hearts.

Jesus then questions them: “Which is easier, to say, ‘Your sins are forgiven,’ or to say, ‘Rise and Walk’?” It’s something of a rhetorical question. Outwardly, no one would know whether the man’s sins were forgiven or not based merely on someone declaring that forgiveness. If Jesus doesn’t have the authority to forgive sins, declaring forgiveness is empty talk. And we all know how terribly easy empty talk is. When Jesus then tells the paralytic to rise and walk, he prefaces it by saying, “But that you may know that the Son of Man has authority on earth to forgive sins.” He says the harder thing to prove the easier saying to be true. St. Jerome writes, “Hence there is a bodily sign in order to demonstrate a spiritual sign.” How do we know Jesus has the authority to forgive sins? Because the paralytic was healed. The miracle demonstrates that Jesus is the promised Messiah who ushers in the Kingdom of Heaven.

The people who had gathered to see Jesus recognized this. Verse 8 concludes our reading:

When the crowds saw it, they were afraid, and they glorified God, who had given such authority to men.

Our Lord demonstrates his power and his authority by showing mercy to those who come to him seeking mercy. If sin has its roots in us humans thinking we can be God, repentance is rooted in admitting before the true God and true Lord who we really are. Our Prayer Book eloquently and brutally puts it this way: we are “miserable offenders,” “there is no health in us,” “we are not worthy so much as to gather up the crumbs under [God’s] Table.” Without our true King, when we’re on our own, this is exactly how we are. But God the Father calls us his sons. Our Lord Jesus calls us his friends. This is our inheritance when we are crucified with Christ and and raised again with him in our Baptism.

I find it interesting that Matthew’s Gospel emphasizes that the crowds “glorified God, who had given such authority to men.” The parallel passages in Mark and Luke emphasize the crowd’s astonishment at the miracle rather than at the authority to forgive sins.

Do not underestimate the glory that comes with the forgiveness of sins. Earlier I noted that it is, on the face of things, easier to say “Your sins are forgiven” than to say, “Pick up your bed and walk.” Yes, it’s easier, but it’s more offensive. Almost every day we see charlatans on TV who claim the power to heal by a mere word. Even when they’re shown to be frauds, most folks just dismiss them as liars or kooks. But for a man to have the authority to forgive the sins of another man is truly a scandalous thing. How often do we encounter people who take offense at the idea that a priest or pastor has the duty and authority to pronounce Christ’s forgiveness to those who repent, whether it’s through private confession or the public general confession and absolution at every mass or office?

The truth is, the forgiveness of sins is one of the greatest signs that the Kingdom of God has been inaugurated, perhaps even greater a sign than miraculous healings. It’s easy to be attracted to the miraculous. It’s also easy to take the ordinary means of grace, such as repentance and forgiveness, for granted. But every time we come to church and hear the words of God’s Law and Gospel, every time we partake of the Lord’s supper, every time we hear the absolution for our sins, this is a demonstration of the coming of Christ’s Kingdom. Every time a sinner is brought to repentance and given new life in Jesus, our Lord shows his authority and power. And this is why we continue to glorify God and proclaim Jesus’ Lordship, knowing that the Kingdom of Heaven truly is come.