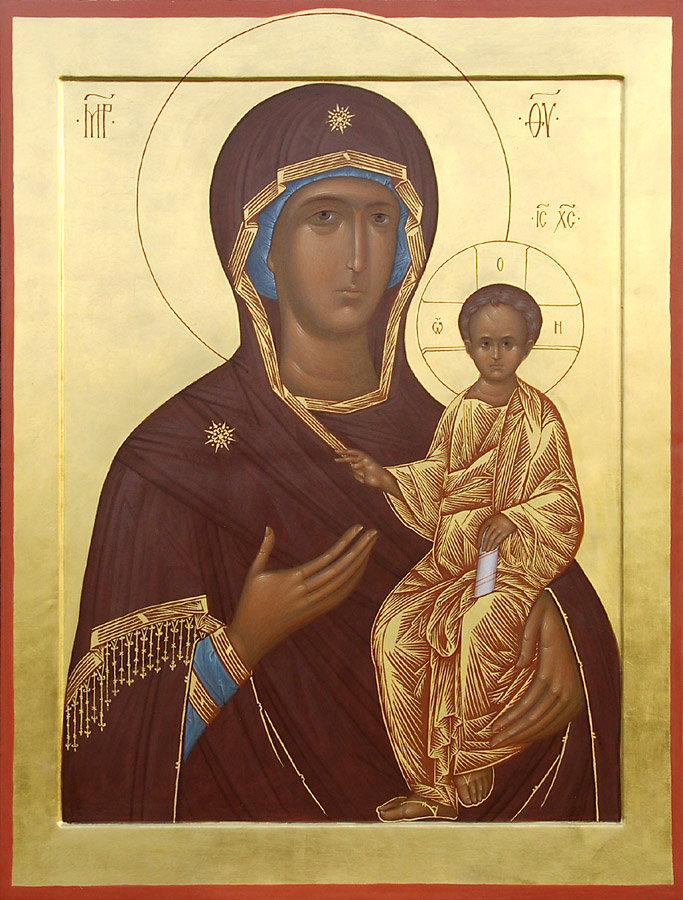 Even among those who are cradle Anglicans and have used the traditional Book of Common Prayer for their entire lives, there is a service, just past the halfway point in the book, that most of us have never seen “in the wild,” as it were. This service is titled “The Thanksgiving of Women after Child-birth: Commonly called the Churching of Women.” In this service, a woman who has recently given birth will say some prayers of thanksgiving, receive some blessings, and often bring a small offering in the church. In most places, the Churching of Women service has fallen out of use since the early 20th Century, largely due to a misunderstanding of the purpose of the service. Though the service is indeed one of thanksgiving for surviving the dangers of childbirth, the service has often been misrepresented as a rite of purification. A good example of this misrepresentation is the portrayal of Queen Victoria’s first Churching on the Masterpiece Theatre show Victoria, in which the queen is angry that the Church would require her to be purified.

The truth is, this misrepresentation is very understandable, as the biblical basis for the custom is the event we read about in today’s Gospel, which is indeed occurring during an Old Testament purification rite. Please turn in your bibles to Luke 2:22, found on page 232 in your Book of Common Prayer:

Today we are celebrating the feast of the Presentation of Christ in the Temple, commonly called the Purification of Saint Mary the Virgin. This feast is also traditionally known as Candlemas, based on a medieval tradition of blessing candles and processing with them on this Feast Day. Verse 24 in our Gospel refers to the purification offering from Leviticus 12, which describes the rituals surrounding the birth of children in the Old Testament. Before summarizing the details of the rituals, we must remember a few things about Old Testament Ceremonial Law. First, remember that it includes both sacrifices and systems for ritual purity and impurity, or ceremonial cleanness and uncleanness. While ritual impurity is supposed to remind us of sin, don’t make the mistake of assuming that ritual impurity or ceremonial uncleanness equates to sin. To be ritually impure in the Old Testament is not necessarily to have committed a sin. However, many aspects of ritual impurity do remind us of the consequences of the Fall.  Second, remember that the Old Testament Ceremonial Law was meant to point us to Christ.  Christ, as our High Priest, fulfills and explains the Old Testament Ceremonies.

In Leviticus 12, we are told that when a male child is born, the mother goes through two stages of ritual purification. First, she is ritually impure for seven days, after which the child is circumcised, as God commanded Abraham back in Genesis. Circumcision is the Old Testament sign of the covenant; the sign of Israelites being set aside as God’s people. The day of the circumcision begins a period in which the mother is ritually impure for another 33 days (40 days in total), after which she is to bring offerings to the Temple to complete the ritual purification. These offerings are described as a sin offering and an atonement offering, normally consisting a lamb for each, though for poor people pigeons or turtledoves could be substituted.

This tells us a few things. First, we see why Candlemas is on February 2; it is 40 days after Christmas. Second, it tells us that the Holy Family was poor at this point, indicating that the Magi’s visit was sometime after their return from Jerusalem. Third, we see that the offering and ritual impurity is based on the Curse of the Fall, when childbirth becomes painful, bloody, and dangerous. That is, even though childbirth is certainly not sinful, but is rather one of the most beautiful blessings of God’s creation, its beauty has been marred by sin and death. Queen Victoria became the heir apparent because the princesses who were in line before her died in childbirth. If you look through Church records from generations past, you often see men who have several wives over the course of their life because their first wives all died in childbirth. The average life expectancy in past centuries was so low in part because of women dying young in child birth and in part because many children died at birth or soon after. In fact, had this been even 50 years ago, Neither Heather nor Leah would likely have survived Heather’s preeclampsia, and I’d be all alone!

Yet, despite this connection between the dangers of childbirth and Old Testament ritual impurity, remember that we do not have such a category in the New Testament. In Christ, categories of ritual purity and impurity simply do not exist. This is why our Churching of Women service is one of thanksgiving rather than purification. In some Christian countries, women would bring a candle in the Churching service as a reminder of that first Candlemas when Christ changed everything. Even though the blessed virgin Mary was too poor to offer up lambs for her sin offering and atonement offering in today’s Gospel, she had brought the Lamb of God, our Lord Jesus Christ, into the Temple, and he would become the ultimate sin offering when he became our atonement on the Cross. As St. John said at our Lord’s baptism, “Behold the Lamb of God, who taketh away the sins of the world.”

In addition to the rite of purification for our Lord’s Mother, we also have the Presentation of our Lord in the Temple. This refers to another Old Testament passage, Exodus 12:2,12, when the firstborn males are set aside as belonging to God as a result of the first Passover. If you remember the Exodus, the final plague on the first Passover was the death of the firstborn sons of both men and animals in Egypt. But God had told the Israelites that he would spare their firstborns  and pass over them if they would slaughter a lamb without blemish and paint its blood on the doorposts of their houses. With that sacrifice, God had purchased all the firstborn of both men and beasts among the Israelites. The firstborn males of ceremonially clean animals (such as cattle and sheep) were sacrificed in the Temple. The firstborn males of people and ceremonially unclean animals (such as donkeys) were to be redeemed by a lamb. The firstborn males belonged to God and were to be a constant reminder of God rescuing his people from slavery in Egypt.

Again, this ceremony was to point us to our Lord Jesus. Just as God rescued his people by the blood of the lamb, so would the blood of God’s Lamb rescue us from our sins. Just as God’s people were to present their firstborn sons to God, so would God present his only-begotten Son for the sake of his people.

Let’s continue in our Gospel with verse 25:

Now there was a man in Jerusalem, whose name was Simeon, and this man was righteous and devout, waiting for the consolation of Israel, and the Holy Spirit was upon him. And it had been revealed to him by the Holy Spirit that he would not see death before he had seen the Lord’s Christ. And he came in the Spirit into the temple, and when the parents brought in the child Jesus, to do for him according to the custom of the Law, he took him up in his arms and blessed God and said,

“Lord, now you are letting your servant depart in peace,
according to your word;
for my eyes have seen your salvation
that you have prepared in the presence of all peoples,
a light for revelation to the Gentiles,
and for glory to your people Israel.”

If you’ve ever come to Evensong or Compline or even prayed Evening Prayer at home, you will recognize this as the Song of Simeon, or the Nunc Dimitis. The Lord had promised Simeon that he wouldn’t see death until he saw the Christ. Reading between the lines, it’s safe to assume that he went from the Temple to a peaceful grave not long after. We sing this song at the end of the day as a reminder that with the salvation promised by the Lord, we can go to our beds each night peacefully, even if our beds will be our grave, because Jesus has taken the sting of death away. For the Christian, death is ultimately no worse than going to sleep. Here in the States, many of our Lutheran friends also use this hymn as a dismissal after Holy Communion. We have seen the Lord’s Salvation at his Table, now we may go forth and bring that light to all the nations.

And here we see a possible connection to the Candlemas custom: “a light for revelation to the Gentiles,” that is, the nations. The Lord’s Christ, the Lord’s Messiah, had come, bringing salvation (which is the very meaning of Jesus’ name), to all peoples, God’s revelation to the benighted Gentiles, and glory for God’s people Israel. As we read in our “for the Epistle” passage from the Prophet Malachi, the Lord had “suddenly come to his temple.” The little baby being presented by the Virgin who was undergoing ritual purification after childbirth was the Lord’s anointed. Malachi says that he will purify the “sons of Levi,” that is, the priesthood. Malachi says that this purification would lead to righteous offerings that are pleasing to the Lord. Even within the pages of the Old Testament, the sacrifices and the priesthood had become corrupt. By the first century it was even more so. But God promised to clean it up, for our sakes. God does not need offerings. But we do. We need our sins to be dealt with. We need someone to intercede for us at God’s altar. We need a pure priest and pure offering.

Again, our Lord Jesus Christ becomes both the true high priest and the perfect offering. In our Communion liturgy we say that he made “a full, perfect, and sufficient sacrifice, oblation, and satisfaction, for the sins of the whole world.” Have been cleansed by his sacrifice, having been reconciled to God by his priestly intercession, we can then offer up ourselves to God as living sacrifices of praise and thanksgiving, as we say in our Communion liturgy. This is why we pray in our Collect for the Feast:

Almighty and everliving God, we humbly beseech thy Majesty, that, as thy only-begotten Son was this day presented in the temple in substance of our flesh, so we may be presented unto thee with pure and clean hearts, by the same thy Son Jesus Christ our Lord. Amen.

The Lord Jesus Christ was presented to God as that Passover Lamb, as the Firstborn of Redemption. In Christ, the Lord had come into his temple to purify and refine it, to purify and refine us. As God’s people whose hearts have been purified and cleansed, we can then also be presented by Jesus to his Father, pleasing to Our Lord, not for our sakes, but for Christ’s.