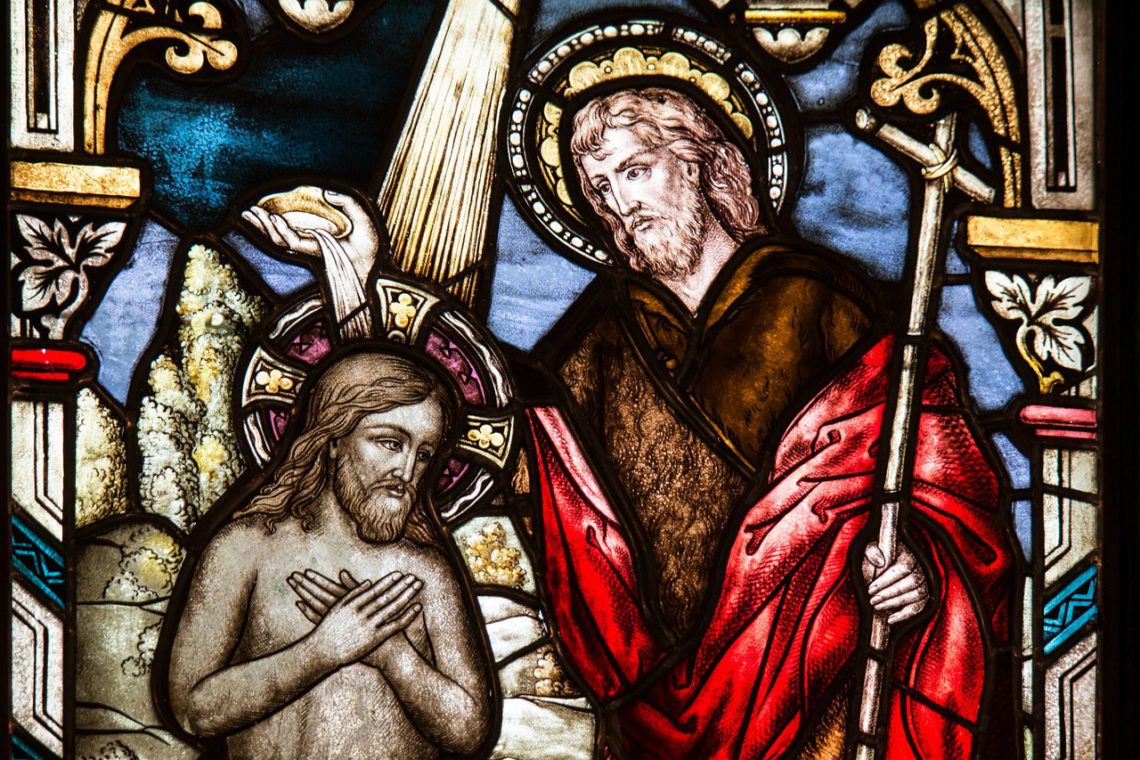 When I was in the discernment process for ordination during my postulancy and during my Master’s Studies at Wayland Baptist, we were often asked to describe our understanding of our call to ministry. That is, what was it that we felt the Lord had called us to as ordained ministers. Early on I realized that the best answer was a very classic one: Word and Sacrament. That is, the traditional description of ordained ministry was good enough. I didn’t need a special calling to a particular demographic. I didn’t need a unique ministry. I simply needed to keep the vocation of a priest foremost in my mind. I am here to minister to God’s people through the preaching and teaching of God’s Word and through the proper administration of the Sacrament. For Anglicans, this means a particular emphasis on the Sacraments of Baptism and the Lord’s Supper.

Of course, every Sunday is an opportunity to partake of the Sacrament of Holy Communion, the Lord’s Supper. Baptisms are a bit more rare. That said, Lord willing, we will have a baptism or two next month as well. That said, today our Gospel passage from the beginning of St. Mark is the Baptism of our Lord, which is a good opportunity to reflect on our own baptisms. In particular, I’d like to talk about the significance of Jesus’ baptism, and its implications for our own. Please turn in your bibles to Mark 1:1, which can also be found in your Prayer Books on page 112:

The beginning of the gospel of Jesus Christ, the Son of God. As it is written in Isaiah the prophet, “Behold, I send my messenger before your face, who will prepare your way, the voice of one crying in the wilderness: ‘Prepare the way of the Lord, make his paths straight,'” John appeared, baptizing in the wilderness and proclaiming a baptism of repentance for the forgiveness of sins. And all the country of Judea and all Jerusalem were going out to him and were being baptized by him in the river Jordan, confessing their sins.

St. Mark’s account of Jesus’ baptism is the shortest and least detailed of the four Gospels. This is typical of St. Mark; he jumps right into the action and rarely stops for breath, and his favorite word is “immediately.” If the Gospel According to St. Mark was a movie, you wouldn’t want to get up to use the rest room; you’d be liable to miss something important!

John’s ministry is presented as the fulfillment of Old Testament prophecy of one who would prepare the way of the Lord. John is blazing the trail for the coming of the Christ, the coming of the promised Messiah. John really is the last of the Old Testament Prophets as well as the first of the New Testament ones. As such, it is important to point out that John’s baptism is a preparatory baptism; it is not the same thing as Christian baptism. The Church Fathers saw the repentance of John’s baptism as something that would prepare folks for Jesus’ ministry. For example, Tertullian writes:

Those who sought the baptism of repentance were dealt with as if candidates preparing for the baptismal remission and sanctification that were soon to follow in the ministry of Christ. When John preached baptism for “the remission of sins,” the declaration was made with reference to future remission (emphasis in the original).

[John] persuaded them to repent of their sins, so that later they might more easily receive pardon through believing in Christ.

This becomes important when we see John contrasting his ministry with that of Jesus who is to come. Verse 6 in our Gospel passage:

Now John was clothed with camel’s hair and wore a leather belt around his waist and ate locusts and wild honey. And he preached, saying, “After me comes he who is mightier than I, the strap of whose sandals I am not worthy to stoop down and untie. I have baptized you with water, but he will baptize you with the Holy Spirit.”

This contrast between John’s baptism of water and Christ’s baptism with the Spirit indicate the sacramental difference. This absolutely does not mean that Christ’s baptism is not with water, but that his is with water and spirit, whereas John’s was merely with water. Following the tradition established by St. Augustine, our Prayer Book’s catechism describes a sacrament as “an outward and visible sign of an inward and spiritual grace given unto us; ordained by Christ himself, as a means whereby we receive the same, and a pledge to assure us thereof.” As the sign and means of “inward and spiritual grace,” we recognize that it is the Holy Spirit who operates in the Sacrament, just as much as we recognize it is the Holy Spirit who quickens God’s word in our hearts when we hear it read and preached.

We yield thee hearty thanks, most merciful Father, that it hath pleased thee to regenerate this child (this thy servant) with thy Holy Spirit, to receive him for thine own Child, and to incorporate him into thy holy Church.

These are promise from God, and they can be trusted because they’re grounded in our Lord Jesus Christ, as we’ll see in his own baptism. Let’s continue in our Gospel passage with Verse 9:

In those days Jesus came from Nazareth of Galilee and was baptized by John in the Jordan. And when he came up out of the water, immediately he saw the heavens being torn open and the Spirit descending on him like a dove. And a voice came from heaven, “You are my beloved Son; with you I am well pleased.”

These three short verses are the extent of St. Mark’s account of Jesus’ baptism. As I said, Mark gets right to the point, with that characteristic word, “immediately.” Mark’s account gives us the Trinitarian focus for the event: the Spirit descending upon Jesus like a dove, and the Father’s declaration of approval. With those two occurrences, we see Jesus’ ministry inaugurated, we see his ministry launched. The Holy Spirit will be active in Jesus’ teachings, miracles, and healings, just as he is in the Word and Sacrament in the Church. And the Father approves of Jesus as the sent-one, as his ambassador, charged with reconciling creation to God. In a similar way, we are sent by the Father to bring Christ to the world, thus continuing the ministry of reconciliation. And because we have been baptized into Christ, because through our faith and baptism we have been identified with Christ, we are also beloved sons, with whom God is well pleased.

You may recall, however, that St. Matthew’s account shows John about to prevent Jesus from being baptized, stating that he is unworthy to baptize the Lord, but rather needs to be baptized by Jesus! And you may recall Jesus’ answer: “Let it be so now, for thus it is fitting for us to fulfill all righteousness.” Even though Jesus had no sin of which he needed to repent, Jesus insisted on being baptized. Even though John was the servant and Jesus was the master, Jesus submitted to John’s baptism. St. Jerome gives us three reasons why our Lord submitted to the baptism of John. He writes:

For three reasons the Savior accepted baptism from John. First, because he was born a man, that he might fulfill all justice and humility of the law. Second, that by his baptism he might confirm John’s baptism. And third, that by sanctifying the wasters of the Jordan through the descent of the dove, he might show the Holy Spirit’s advent in the baptism of believers.

Second, he confirmed John’s ministry as the herald of the Messiah and the herald of the New Covenant. John had been proclaiming Christ’s coming, and now Christ came to John. Front this time forward John decreases and Jesus increases.

Third, in being baptized by John, Jesus initiates Christian baptism. He sanctifies the waters to become the sacrament of baptism, the sacrament wherein the Holy Spirit comes upon us, just as he did upon Jesus.

Of course, the fullness of Christian baptism would need to wait until after the Resurrection and Ascension. As St. Jerome writes, “No baptism can be called perfect except that which depends on the cross and resurrection of Christ.” Indeed, it is after his Resurrection and right before his Ascension that Jesus tells the Apostles to make disciples of all people, baptizing them in the Name of the Father, the Son, and the Holy Ghost, teaching them to observe all of Christ’s commandments.

This is, of course, the other aspect of our baptism. We are baptized into Christ, and specifically into his death and resurrection. We are buried with him in the waters of baptism and raised to new life in him. Our Catechism tells us that the inward and spiritual grace of baptism is “A death unto sin, and a new birth unto righteousness: for being by nature born into sin, and the children of wrath, we are hereby made the children of grace.” In order to receive that grace our catechism says that people need “Repentance, whereby they forsake sin; and Faith whereby they steadfastly believe the promise of God made to them in that Sacrament.”

This is what it means for disciples to have been taught to observe all Christ’s commandments. It means we life a life of repentance and faith. In the Holy Scriptures we see what that looks like, as we hear them, read, mark, learn, and inwardly digest them, we are shaped into people who look like Christ, people who are obedient to the Father, and people whose lives are marked by repentance and faith. We also have the Prayer Book, all of whose services are catechetical. We are taught the Scriptures and taught the Faith as we pray together, as we worship together, and as we study the basic and biblical teachings of our faith contained therein.

Granted, this is a lifelong process, and none of us will be perfect on this side of eternity. Indeed, as we grow in this process we’ll find how difficult perfection is! But the point is not to become perfect through our own efforts. No, we cannot “fulfill all righteousness” on our own. That’s what Jesus does. Rather, our job is to follow him. To become more and more like him.

You see, in all aspects of his Incarnation, Jesus became one of us. He became human as we were always meant to be. That’s why St. Paul calls him the Second Adam. This is true also of his baptism. He was baptized because we would be called to be baptized also. He identified with us, so that we could identify with him. To paraphrase from the end of our baptismal service,

And we humbly beseech [God] to grant that we, being dead unto sin, may live unto righteousness, and being buried with Christ in his death, may also be partakers of his resurrection; so that finally, with the residue of [God’s] holy Church, we may be inheritors of [God’s] everlasting kingdom; through Christ our Lord.