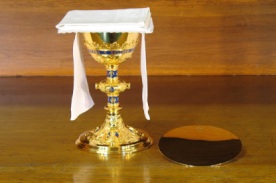 Six years ago this month, Heather and I were married at Christ Our King Anglican Church in New Braunfels. It was my last service as one of the assisting priests at CoK, as I would begin my new role as the then-assistant Rector here at All Saints as soon as we returned from the honeymoon. As it was the transition time, the guests and altar party consisted of folks from both parishes. Like every wedding, ours had its share of minor mishaps. For instance, the baker wasn’t sure she could complete the bride’s cake, so my best man spent much of the morning looking for potential gluten-free alternatives. And the bridesmaids got lost in downtown New Braunfels on the way to the church. And then there was a mishap that is very reminiscent of today’s Gospel: we ran out of wine. Specifically, we ran out of consecrated wine during communion! And the poor deacon, who had been on the job for only a month or so, didn’t know what to do about it! Fortunately, our own Fr. Marcus, a veteran deacon at the time, stepped in to show him the ropes, more wine was consecrated, and everything turned out fine.

As I said that memory is very similar to what happened in today’s Gospel lesson, the Wedding at Cana from John 2. Please open your bibles to John 2, beginning at the 1st verse. The passage can also be found in your Prayer Book on page 113:

On the third day there was a wedding at Cana in Galilee, and the mother of Jesus was there. Jesus also was invited to the wedding with his disciples.

Last week we celebrated the Baptism of Jesus in the River Jordan. In the context of John’s Gospel, the baptism occurred in the previous chapter, followed by two days of Jesus calling the first disciples. 19th Century priest, historian, and Jewish convert Alfred Eddersheim says that the custom in 1st Century Galilee was for maidens to be married on Wednesday, indicating that the Baptism was probably the previous Sunday, three days before the events of our Gospel today. Eddersheim also says that the Apostle Nathaniel, whom Jesus had called on Tuesday, the previous day, was likely from Cana. At that call, Jesus had revealed to Nathaniel that he had seen him, presumably in a vision, under the fig tree in prayer or study earlier. Nathaniel then declared that Jesus was the King of Israel and the Son of God. Nathaniel immediately realized that Jesus was indeed the Messiah. Jesus answered him, saying that he would see greater things. As we know from the end of today’s Gospel passage, it didn’t take long for Jesus’ prediction to come true!

But in the meantime, we have a wedding in Nathaniel’s village. The current opinion among archaeologists is that Cana of Galilee was the modern site of Khirbet Kana, a site about 8 miles north of Nazareth. Was Jesus invited to the wedding because he and his followers were staying with Nathaniel? Or did he meet Nathaniel as he was heading to the wedding?

There is a sense where Jesus attending this wedding could seem a bit odd at this point. After all, he had just been commissioned by his Father to begin his ministry, as we saw last week in Jesus’ baptism. If he’s got to get about his Father’s business of preaching the Gospel and bringing the Kingdom of God, does he really have time for a party? On the contrary, says St. Augustine. Augustine sees the wedding at Cana as a microcosm of our Lord’s mission. Augustine writes:

The Lord was invited and came to a wedding. Is it any wonder that he who came to that house for a wedding came to this world for a wedding? … Therefore he has a bride here whom he has redeemed by his blood and to whom he has given the Holy Spirit as a pledge.

Not only are Jesus and his disciples at the wedding; we see that our Lord’s blessed Mother was also there. 17th Century Anglican Divine John Cosin observes that Mary was likely invited first because of a 1st Century custom to invite mature, godly, modest women to help the bride and be role models for her. Cosin says that this indicated that the couple were taking holy marriage seriously, and this may be why Jesus and his disciples later came to the feast. Cosin then gives us some advice for our own Christian marriages. He writes:

The only reason why Christ does not show up at more of our weddings nowadays is that we do not first invite his mother. Which is to say, we do not invite sobriety and moderation together with a holy intention to be joined together now and for the rest of our lives in the fear of God and in the keeping of his commandments.

Indeed, we ought to take Cosin’s admonition seriously if we are to have our marriages be pictures of Christ and his Church, as per Ephesians 5. We ought to come into it differently than the world does. The world looks at marriage as being ultimately about my own personal fulfilment and happiness, with an escape clause of “irreconcilable differences” when I don’t feel fulfilled or happy. No, Christian marriage is about honoring God by loving that closest neighbor (that is, our spouse), as ourselves, with the self-sacrificial love of Christ, and submitting as unto the Lord, even as the Church submits to Christ. Again, the Blessed Virgin Mary is an example of that kind of submission. Let’s pick up the passage in John 2:3

When the wine ran out, the mother of Jesus said to him, “They have no wine.” And Jesus said to her, “Woman, what does this have to do with me? My hour has not yet come.” His mother said to the servants, “Do whatever he tells you.”

When Mary tells Jesus about the lack of wine, his response can certainly seem a bit cold or harsh, almost a rebuke. But instead of doubting his love, she sends the servants to him in faith, trusting in his goodness, kindness, and compassion. Martin Luther writes:

God’s kindness, and not our feelings, remains in us. Here you see his mother retains an unfettered faith and holds up an example for us. She is certain that he will be merciful, even though she does not feel it. And it’s certain that she feels differently than she believes. Thus she freely commends the matter to his kindness and demands from him neither time nor place, neither manner nor measure, neither person nor name. He’ll do it when it pleases him.

This is the kind of faith that Christian marriage is to illustrate, a marriage that is centered on Christ. Let’s continue in our Gospel with Verse 6:

Now there were six stone jars there for the Jewish rites of purification, each holding twenty or thirty gallons. Jesus said to the servants, “Fill the jars with water.” And they filled them to the brim. And he said to them, “Now draw some out and take it to the master of the feast.” So they took it. When the master of the feast tasted the water now become wine, and did not know where it came from (though the servants who had drawn the water knew), the master of the feast called the bridegroom and said to him, “Everyone serves the good wine first, and when people have drunk freely, then the poor wine. But you have kept the good wine until now.” This, the first of his signs, Jesus did at Cana in Galilee, and manifested his glory. And his disciples believed in him.

St. John calls the miracle at Cana “the first of his signs.” In the Gospel of John, there are seven “signs,” each revealing Jesus’ Messianic character and glory in an extraordinary miracle. In today’s Gospel, we see the miracle in the exceptionally large quantity of exceptionally high-quality wine. Six stone jars with twenty or thirty gallons of wine becomes the equivalent of 600 to 900 bottles of wine. Even if the whole village was at the wedding feast, that is still a very large amount of wine! Martin Bucer, a German Reformer who helped Thomas Cranmer write the first Book of Common Prayer, snarkily pointed out that some groups of Christians probably would have rebuked or even excommunicated Jesus for such extravagance that could potentially lead to drunkenness! But there’s an important spiritual lesson here. In the Old Testament, wine was a sign of joy and God’s blessing. Running out of wine was a symbol of the barrenness of 1st Century Judaism. We need Christ to give joy, blessing, and life to our religion.

When he turned the water itself into wine, he showed us that the ancient Scripture comes from him too; for by his order the jars were filled. This Scripture, too, is indeed from the Lord. But it has no taste if Christ is not understood in it.

Just as Jesus did not let the party be without wine, but rather provided for the feast extravagantly, so does he provide for us. He gives us his grace extravagantly. Indeed, if it weren’t for an extravagant grace, sinners like you and I could not be saved. Martin Bucer writes:

As he would not allow these guests to lack wine, so also he will not allow us to lack anything – especially spiritual goods – related to our salvation. These are certain and bequeathed to us by the Spirit of God.

And speaking of certain signs from God’s Spirit, don’t miss the Sacramental imagery in the wine, which should always remind us of Christ’s blood in Communion. This is a theme that the Church Fathers particularly notice. 5th Century Bishop Caesarius writes: “It is he who came down to earth to invite his beloved to marriage with his highness, giving her for a present the token of his blood and intending to give later the dowry of his kingdom.” St. Augustine writes “Therefore he has a bride here whom he has redeemed by his blood and to whom he has given the Holy Spirit as a pledge.” St. Cyril of Jerusalem writes, “He once changed water into wine by a word of command at Cana of Galilee. Should we not believe him when he changes wine into blood?” And then we have this sung poetic sermon by 6th Century deacon and Jewish convert Romanus Melodus:

When Christ, as a sign of his power, clearly changed the water into wine
All the crowd rejoiced, for they considered the taste marvelous.
Now we all partake at the banquet in the church
For Christ’s blood is changed into wine
And we drink it with holy joy,
Praising the great bridegroom,
for he is the true bridegroom, the Son of Mary,
The Word before all time who took the form of a servant,
He who has in wisdom created all things.