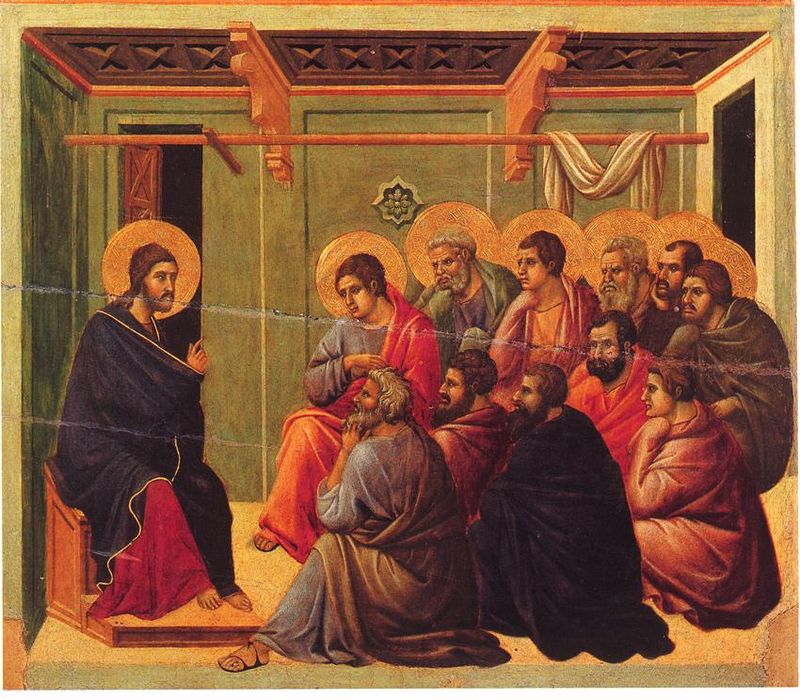 At the beginning of every Lent, we read St. Matthew’s account of Jesus’ temptation in the Wilderness by the devil. The first of these temptations is to turn stones into bread. After all, Jesus had been fasting for 40 days, and (as the text says) “he was afterward an hungered.” Satan wanted Jesus to prove himself to be the Son of God by working a self-serving miracle for its own sake. Our Lord famously answers by quoting Deuteronomy 8:3, “It is written, Man shall not live by bread alone, but by every word that proceedeth out of the mouth of God.” Jesus certainly could have turned the stones into bread. He certainly had the power. But his answer to the devil tells us why he did not exercise this power at this time: as important as our basic physical needs are (indeed, what can be more basic than food and drink?), our spiritual need to hear from God is even more important.

Today’s Gospel from the 8th Chapter of St. Mark’s Gospel is one of the times when Jesus does exercise his powers over creation to meet physical needs. Yet even in this miracle of feeding the multitude, Jesus feeds us with the Word of God and not merely bread alone. Please open your bibles to Mark 8:1 (page 199 in your Prayer Book):

In those days the multitude being very great, and having nothing to eat, Jesus called his disciples unto him, and saith unto them, I have compassion on the multitude, because they have now been with me three days, and have nothing to eat: and if I send them away fasting to their own houses, they will faint by the way: for divers of them came from far. And his disciples answered him, From whence can a man satisfy these men with bread here in the wilderness? And he asked them, How many loaves have ye? And they said, Seven. And he commanded the people to sit down on the ground: and he took the seven loaves, and gave thanks, and brake, and gave to his disciples to set before them; and they did set them before the people. And they had a few small fishes: and he blessed, and commanded to set them also before them. So they did eat, and were filled: and they took up of the broken meat that was left seven baskets. And they that had eaten were about four thousand: and he sent them away.

Now, this was not the first time Jesus had fed a great multitude with a relatively small meal. Two chapters earlier, Jesus had fed 5,000 men with five loaves and two fish, resulting in a surplus of twelve baskets full of leftovers after everyone had eaten. In today’s passage the numbers are different, but the miracle is similar. Today 4,000 men were fed with seven loaves and “a few small fish,” with seven baskets left over. And these baskets were probably very large; the same Greek word used here in Mark 8 (and in St. Matthew’s parallel passage) is used in Acts to refer to the basket in which St. Paul was smuggled out of Damascus.

You may have heard some bible teachers postulate that the repeat of the story, apparently in two different forms is evidence that the authors were getting things mixed up somehow, and maybe the miracle didn’t even really happen. But if you look later in our chapter (as well as in St. Matthew’s parallel passage), Jesus himself mentions both events in teaching the disciples. Verses 14-21 of our chapter both affirm the feeding of the multitude as two actual events, and also help explain the significance of the miracles. Mark 8:14:

Now the disciples had forgotten to take bread, neither had they in the ship with them more than one loaf. And he charged them, saying, Take heed, beware of the leaven of the Pharisees, and of Herod. And they reasoned among themselves, saying, It is because we have no bread. And when Jesus knew it, he saith unto them, Why reason ye, because ye have no bread? Perceive ye not yet, neither understand? Have ye your heart yet hardened? Having eyes, see ye not? And having ears, hear ye not? And do ye not remember? When I brake the five loaves among the five thousand, how many baskets full of fragments took ye up? They say unto him, Twelve. And when the seven among four thousand, how many baskets full of fragments took ye up? And they said, Seven. And he said unto them, How is it that ye do not understand?

In other words, the bread is not the point! While it was certainly good to feed the multitudes so that they would not faint on the way home, the bread of the miracles points to something deeper. Remember what Jesus said in his quote from Deuteronomy during his Temptation: “Man shall not live by bread alone, but by every word that proceedeth out of the mouth of God.” The Pharisees and Herod, representing the spiritual and temporal authorities in Jesus’ day, were supposed to be feeding the people with the word of God. But their “bread” was had the wrong “leaven.” The active agent in the “bread” wasn’t God’s word but was rather their own agenda. By contrast, back in John 6, Jesus said that we must feed on the Son of Man, the Word Made Flesh, in order to have true life.

Especially within the context of John 6, this has clear Eucharistic and Sacramental significance. But here in Mark 8, the emphasis is more on the people feeding on Christ’s teachings. Notice that Jesus points the disciples back to the numbers within the miracles. Numbers often have significance in the Scriptures. However, the mathematics of the miracles are not really the point. As Charles Spurgeon pointed out in one of his homilies on the passage, everyone ate and was filled. Jesus didn’t have to measure out the miracle. Spurgeon says of the people, “Their power to eat was exhausted, but not Christ’s power to feed; for when they had received to their utmost capacity, there was yet more to follow.” Jesus was not limited when feeding the multitudes with bread and fish. Nor is he limited when feeding us with his Word, when he feeds us with his very self.

Nevertheless, we do see important symbolic significance in biblical numbers. This isn’t to allegorize Scripture, but certain numbers are an important reoccurring pattern within the Bible. Mark Twain is supposed to have said, “History doesn’t repeat itself, but it often rhymes.” In Scripture the repetition of certain numbers is one way that God shows this rhyming.

The number four or forty is one such repetition. It often symbolizes totality within the world that can be seen, the physical world. There are four cardinal directions (north, south, east, and west). The fullness of the earth is described by the “four corners of the earth.” Judgement on the world was in the form of 40 days and nights of rain. Judgement on God’s people was 40 years in the wilderness. Moses, Elijah, and our Lord all fasted for 40 days. We see four “living creatures” in Ezekiel and Revelation which are often seen as representing the four Gospels. In today’s Gospel, we have 4,000 men fed in the miracle.

The number seven also has symbolic significance in the bible. It typically symbolizes perfection or completeness. It is the sum of four and three, the numbers of the physical world and the spiritual world, respectively. We see seven days of creation, symbolizing the completion of God’s work in creating the world, and the fact that it was “very good.” There are 70 nations in the bible, representing the completion of humanity. Israel was in exile for 70 years to experience God’s perfect and complete judgement. There are seven spirits of God in Isaiah and Revelation, representing the perfection of God’s revelation to his people. We refer to this in the sevenfold gifts of the Holy Spirit given to us in Confirmation. In today’s Gospel we have seven loaves of bread and seven baskets of leftovers.

And then there’s the number five, representing God’s Word, due to the five books of Torah, the Law, the five books of Moses, which are the foundation of the rest of Scripture. There were 5,000 men fed with five loaves in the first feeding of the multitude.

Finally, we have the number twelve, the product of three multiplied by four, symbolizing God’s people. There were twelve sons of Jacob, twelve Patriarchs of the twelve tribes of Israel. There were also twelve Apostles called by our Lord in the New Covenant. Therefore, twelve is often a symbol of Israel or the Church.

When we put these numbers together we can see some of what Jesus was saying through these miracles. St. Augustine tells us that the 4,000 remind where we learn of our divine bread: the four Gospels. Oxford Divine Isaac Williams alternatively says that those who are fed by the Lord come from all four corners of the world. That is, Jesus does not turn anyone away who is hungry. Both preachers see the seven loaves as representing the illumination that comes from the sevenfold gift of the Holy Spirit. St. Augustine sees the seven baskets of leftovers in today’s Gospel as the completion or perfection of the Church as God makes her holy. Williams sees the twelve baskets referred to in Jesus’ explanation as a reference to God feeding us by means of the Church. Williams writes:

These [hungry who seek Jesus] He will feed by means of His Church which is built on “twelve foundations,” in which are “the names of the twelve Apostles of the Lamb;” shall feed them with the seven gifts of the Holy Ghost, — that Bread which is the food of the soul. And herein we have His deeper and fuller answer to that question of the disciples, “Whence can one satisfy these with bread in the wilderness?” The world is a wilderness, what therein can satisfy the human soul? Nothing, surely, but the Bread from Heaven which Christ gives. And He has promised that they who hunger after righteousness shall be filled.

As we have said, Jesus feeds us with himself. He feeds us with his Word. Many of those who ate of the miraculous food missed this. Immediately after today’s Gospel passage the Pharisees confront Jesus, demanding a sign as proof of who he was. What more proof did they need? There were 4,000 men, not counting the women and the children who were just fed by Jesus, using seven loaves of bread! Indeed, the Pharisees sound not unlike the Devil in Jesus’ temptation: “If you truly are the Son of God, then….” But Jesus will have none of that. He says that he will not give them the sign they demand. Indeed, they were focusing on the gift rather than on the giver. They wanted miracles and signs; they did not want the Lord.

We can easily fall into a similar and equally dangerous error. We can spin our wheels trying to find the perfect Church with the proper liturgy and music. We can focus so much on wider Church politics or controversies that we forget to feed upon the Word and Sacraments that are offered at the Lord’s mystical table. We can get so bogged down in the cares of this life that we forget that we are hungry and faint, and that we need Jesus more than anything else.

Instead look to the Master. Look to the Lord Jesus. In our Collect we prayed that God would “nourish us in all goodness.” The Word of God and the Word made Flesh are how God fulfills that prayer. For man does not live by bread alone, but by every word that proceedeth from the mouth of God.